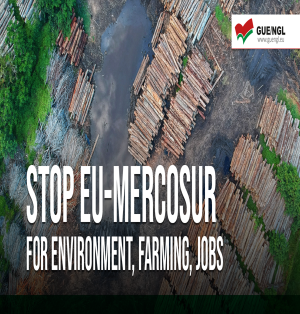 Let me express from my side as well a warm welcome to everybody in this room, and to all those following our web-stream from offices and homes around the world.

This agreement deserves your interest. Should it ever enter into force, the agreement will have an impact on the lives of over 780 million people. Maybe less, if the UK decides to withdraw after the elections today. The volume of trade is just under 90 billion Euros per year.

Based on the text presented, the agreement would save European companies 4 billion Euros worth of duty payments per year. That is the biggest deal the EU has ever made. Finance ministers in Argentina, Brazil, Paraguay, and Uruguay will miss this amount in their balance sheets.

Seeds of hope have been planted in South America that tax collected from improved economic development will make up for this loss. We need to notice at this point that after every trade agreement concluded by the European Union, the balance of trade shifted in favour of the EU afterwards.

The winners in Europe would be companies in the machineries and pharmaceutical sector, accounting for half of EU exports. Car producers are hopeful, as well producers of processed foods. If you look at where the companies are established that are actually trading with Mercosur, it is Germany, Spain, the Netherlands, France, and Portugal. There is not much trade with Central and Eastern European countries.

What are Mercosur companies exporting to Europe? It is mainly commodities. Agricultural products accounted for more than 40 percent this year, minerals for another 18 percent. If you look at services, the volume of services exported from Europe to Mercosur is three times higher than the other way round. And this is going to increase, as Mercosur countries are giving substantial openings in public procurement and financial services.

To sum up, there will be rather few, rather large companies from a handful of EU Member States profiting from the agreement.

So why should we need this trade agreement at all? Does it serve the most important challenges of our time? Will it help to reach the Sustainable Development Goals by 2030? Will our people benefit from it? I am not against trade. I am in favour of trade as a form of communication. But we do not need these old-fashioned trade agreements any longer. We need agreements to support cooperation, including to improve the economic situation of our people, but not degrading all other aspects of development of our societies as side-issues.

Just yesterday, the EU Commission presented the proposal for a European Green Deal in this house. It does contain a number of interesting proposals. It could actually give some hope. But when it comes to international cooperation and trade, the communication is unfortunately eurocentristic and blind-fold.

“European food is famous for being safe, nutritious and of high quality. It should now also become the global standard for sustainability.”

Well, it is true, there are some excellent examples of organic and sustainable farming and food production in Europe. Some of these products form an important element of our cultural heritage. We are all for it.

But we also have industrial forms of animal “production” in Europe. These cows and pigs are being fed on GMO soy imported cheaply from Brazil and Argentina.

There are shiploads of soy arriving in the harbours of Rotterdam or Antwerp. The containers - and in the majority of cases without being tested for pesticide residues - are then transported by truck to industrial stables with 50.000 pigs or more, or to cattle breeding facilities. Food products from the meat of these animals are being exported at dangerously competitive prices to Canada, to Japan, to Korea, to China, to Colombia, and soon to Mercosur countries.

While some European food corporations make a fortune, the adjacent local population in Europe is being left behind with the massive sewage problem, which comes along with 50.000 pigs. Our soils, our rivers and our lakes and seas are suffering.

The EU - Mercosur agreement further encourages this business model. It will increase profits for those who can produce on large scale. The agreement is literally reducing the space for sustainable farming both in Europe and in Latin America.

The perspective of being able to sell more soy and beef to the EU and to China has already let to burning fires in Amazonia on a dramatic scale. China has bypassed us as number one export destination for Mercosur.

If EU companies are permitted to order from producers that can be linked to the fires, it is like ordering a crime. Normally, in our legal systems, ordering a crime should be punishable and not rewarded.

Since the term green deal is playing with a reminiscence to Roosevelt’s New Deal from the 1930s, it should be remembered that Roosevelt spoke out strongly against business models, which are based on exploitation.

I cannot close my remarks without saying a word about one man who is supposed to sign this deal: Brazil’s president Bolsonaro.

This man can not be trusted!

What does it mean if this man signs a chapter on trade and sustainable development? At the same time he is announcing it as an economic strategy to cut the Amazon rain forest. He is attacking the indigenous population of Brazil. He attacks the black population. He attacks members of left wing parties and trade unions. He attacks gay people. He attacks women. Supported by evangelist preachers and a lot of money from American billionaires, he organises a roll-back in Brazil against all achievements of the rights movements.

EU Commission and EU Member States, if you want to talk to us about promoting European values, you do not sign an agreement with a fascist!

Thank you for listening to me and let us work together to stop this deal from happening.