Europe yes, but how? 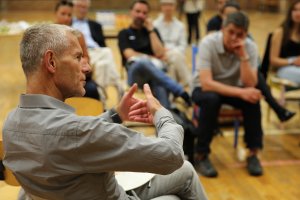 Helut Scholz during the discussion

On 11.07.2019 at 7 pm the dialogue #5 of the series Europe yes, but how? took place at Brückenplatz | Plac Mostowy 2.0 in the German-Polish border in Frankfurt (Oder). After a short welcome by the European Democracy Lab, action artist Michael Kurzwelly, founder of the city and the association Słubfurt, presented the location of the event. The Brückenplatz | Plac Mostowy is an urban space that is designed by the inhabitants of Słubfurt themselves. Słubfurt is the first city to be located half in Poland and half in Germany. It was founded in 1999 and then registered in the RES (Register of European City Names) in 2000. The city is made up of the two districts Słub (Słubice) and Furt (Frankfurt), which are to the right and left of the Oder. Słubfurt counts with a "Słubfurter Parliament", at whose meetings every participant is automatically a "city councillor" and has one vote. At these meetings, new working groups can be formed again and again on the respective ideas, which then meet independently to work out and implement their ideas.