THE ASIAN CENTURY – HOW RCEP CHANGES GLOBAL ECONOMICS AND POLITICS 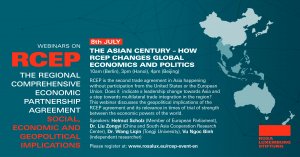 On 15th November 2020, the Regional Comprehensive Economic Partnership (RCEP) was signed at the Association of Southeast Asian Nations (ASEAN) summit through a video-conference. It has been signed after eight years of negotiations and is already a landmark in the regional economic integration. The RCEP includes China, Australia, Japan, Korea, New Zealand and the 10 ASEAN Members Brunei, Myanmar, Cambodia, Indonesia, Laos, Malaysia, the Philippines, Singapore, Thailand and Vietnam. It is so far the world`s largest trading bloc, covering 29 percent of the global economy and more than a third of the of the world`s population. It is expected to raise trade among members by about $420 billion, add $500 billion to global exports, and improve the national income of the 15 countries by $186 billion by 2030. The Agreement promises a boost in the total Gross Domestic Product (GDP) of its member states, and that companies located in the RCEP-region can leverage on this free trade agreement and benefit from the preferential market access provided like tariffs elimination, service-sector liberalization and the elimination of non-tariff barriers. But it is not just about market access, it covers issues such as dispute settlement mechanism and intellectual property rights.

The agreement inevitably comes with economic, social and geopolitical implications for the states and the societies in the region as well as on the global economy. The Rosa-Luxemburg-Foundation (RLS) is organizing a webinar-series to highlight the political, social and economic impact and consequences of the Free Trade Agreement RCEP.