Genocide against the Tutsi : the truth, right now! 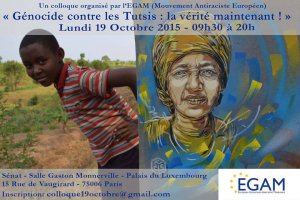 Dear participants and organizers of the Colloquium dedicated to «Genocide against the Tutsis: the truth, right now!» ,

As spokesman of PGA Group at the European Parliament I would like to convey you the best wishes for the forthcoming historically and socially very important work of the Colloquium and wish you explicitly success within your work. Please use this invaluable opportunity to break the silence, to learn, to exchange, to meet, to debate and to question together.

Parliamentarians for Global Action (PGA) is a network of over 1,300 individual legislators from 140 countries who strive to promote, among others, human rights, the rule of law, democracy, peace and security. Over the years, issues regarding accountability, right of victims and right to truth for the most serious crimes of international concern, including genocide, including in the campaign of PGA for the International Criminal Court (ICC) as a means to fight against impunity for international crimes. In this sense we understand ourselves as part of the international struggle for peace building - within the world and within our societies - through a globalization of legal principles that guarantee at the end the indivisibility and universality of international law. This system of international law should in its core spread out a preventive effect to deter state crimes and "collective destructiveness" combining the individual responsibility for the most serious crimes, which was legally known since the IV. Hague Convention for more then 100 years, with the for a long time lacking criminal prosecution. But for sure we know that the necessary punishment of crimes against humanity under the international law must and can be only be part of a political and cultural work up within our societies.

Through my experience I have learnt that historical accounting via truth seeking and truth telling is one of the most important steps in the difficult and complex process of reconciliation in war-torn societies. I grew up in a part of Germany where the Nuremberg trials telling us the truth about Germany's responsibility for the unimaginable German crimes during WW II where taking a central place in the culture of remembrance. I frequently attended in the recent past the conferences of the Liberation War Museum in Dhaka / Bangladesh, where especially for the remembrance within their own society the question of the truth about the genocide in Bangladesh is permanently raised. We know that very difficult truth contraptions are running in Kampuchea and that the correspondent process in Indonesia begun only right now 50 years after the genocide. Concerning Guatemala, Sri Lanka, Congo and Palestine only to name just some of these processes have not yet started at all. But indeed, the right to truth is essential in order to address the past, avoid past mistakes, recognise the crimes committed and acknowledge the harms and damage inflicted upon individuals by the State or other perpetrators. The acknowledgement of wrongs suffered can also help the process of forgiving and healing and eventually deter acts of vengeance, counter rivalries and hatred that may arise after the conflict.

Moreover, the right to truth grants a central place to victims through their direct involvement, which is of the utmost importance, as they have to be included in the post-conflict reconstruction broader process. Truth commissions for example provide for a public platform for victims and encourage public debate on sensitive and controversial subjects, and can also be very beneficial to the society at large by recommending legal and institutional reforms in order to ensure greater promotion and protection of human rights.

In Rwanda, there have been many efforts to understand the truth by a variety of stakeholders, including the Gacaca which started in 2001 as community-led courts built on traditional community legal systems. The idea to rebuild a sense of unity while allowing for a dialogue on the community level through those Gacaca made them quite succesful and central to move towards reconciliation.

However, the right to truth and reconciliation cannot be considered as a substitute to the judicial system but a rather as a complementary process. Indeed, it has to be coupled with guarantees of non-repetition such as legislative measures, access to basic rights (education, …) and individual accountability in judicial trials, which is an effective deterrent to future abuses of human rights and is necessary to break the cycle of impunity while reinforcing the reconciliation process. Such guarantees of non-repetition and judicial measures are also meant to promote human rights and prevent private revenge and retaliation, which only fuel the cycle of violence. Indeed, it has been proved that the lack of accountability has led to great levels of impunity and repeated cycles of violence, as the 2011 World Bank Report clearly stated.

Victims have a right to truth and justice that it is thus necessary to respect and ensure, so as to contribute to establish the truth about the past, end impunity and break the cycle of violence. Those are a precondition for peace and stability, development and the effective protection of human rights while ensuring the acceptance of the process by victims and affected communities, ensuring that the success of any reconciliation process. This could be promoted also through an (international) abolition of death penalty hindering still to often to the conciliation processes of truth and justice.

Thus, I encourage all initiatives such as this gathering to deal in an open manner with the past, even years after the events such as in Rwanda in order to secure a future for the next generations which is free of violence, hatred and resentment.