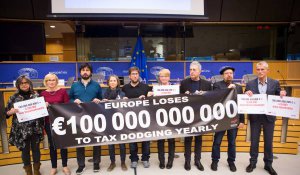 The fight for tax justice suffered a setback this week as a grand coalition of the EPP and S&D reared its ugly head and joined forces to water down a parliamentary vote that would have enhanced measures against tax avoidance and protections for whistleblowers.

In October, a majority of members of the European Parliament's Panama Papers inquiry committee, including GUE/NGL MEPs, adopted a report that included many important and progressive provisions. The full plenary of the European Parliament voted on the report this week in Strasbourg. But at the eleventh hour, the S&D reneged on key aspects of the committee's adopted report and voted to abstain on a number of progressive paragraphs in order to keep their conservative grand coalition partners happy.